Nightingale Initiative for Global Health (NIGH)
HOW WE WORK 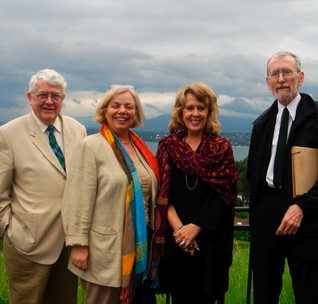 NIGH’s progress has been achieved through worldwide friendships formed in the sharing of common goals. NIGH's core team and advisors include nursing and midwifery leaders, scholars and citizen activists, as well as experts in global communications strategies — experienced in advancing informed concerns. Among these ‘friends’ are those who have worked within the United Nations, its Agencies and related collaborating organizations of civil society.  Our founders often refer to their experience based upon United Nations ‘Development Support Communications’ outreach.

Established, in 2006, as a US non-profit 501(c)3 in Washington, DC, ‘NIGH USA’ with the now-parent organization of 'NIGH World '— a Canadian non-profit corporation formed in 2008 — also established, in 2019, in Switzerland, NIGH's support derives from private donations, sponsorships, partnerships and with substantial in-kind and pro-bono contributions and volunteering. We are now exploring further support for specific projects from grants and foundations and through upcoming collaborations with schools, universities, media and related stakeholders with similar goals.

The above photo — of four of NIGH World's Board of Directors — was taken near the United Nations Headquarters in Geneva, Switzerland in 2007.  From the left: Wayne Kines, NIGH's Director of Communications; Dr. Deva-Marie Beck and Dr. Barbara Dossey who serve together as NIGH's International Co-Directors; and Cyril Ritchie, currently First Vice President of the Congress of NGOs in Relationship with the United Nations — CoNGO. Photo from NIGH's Archives.

For example, Mr. Ritchie was instrumental in establishing NIGH's work in collaboration with the United Nations. Starting in 2009, he facilitated Panel Presentations — by Dr. Beck and Mr. Kines — at two Civil Society Development Forums in UN-NGO-preparation for two UN ECOSOC 'High Level Annual Ministerial Reviews' convened in 2009 — for the topic of 'Global Health' in Geneva — and in 2010 — for the topic of 'Women's Issues and Gender Equity' in New York City.

If you would like to explore how you can collaborate with us to build NIGH in your region, you are always welcome to contact us.

“How can we be 'stewards of grace' to one another?
By giving the 'grace' of our good example to all around us.”   Florence Nightingale, 1874