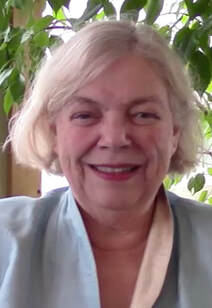 Deva-Marie Beck is a Canadian/American who has been working—for nearly three decades—on approaches to citizen advocacy for achieving global health and the UN's Global Goals, including the Millennium Development Goals and the Sustainable Development Goals (SDGs). In 2020, she has contributed to this work with two video productions — In Florence Nightingale Own Words — and Introducing the Nightingale Declaration.

​Now — as Editor in Chief of NIGH's website — she oversees the posting of stories — from nurses, student nurses and concerned citizens about achieving the SDGs and related topics.

Dr. Beck's multi-disciplinary education in arts and science both shaped her commitment to become a nurse specializing in clinical critical care and women's health (1976 - 2002) and global health (1992 - present). Dr. Beck holds a PhD in Interdisciplinary Nursing and International Development from the Union Institute and University (2002), and undergraduate degrees in Nursing, Health Sciences, and Theatre Arts.
You are welcome to email Deva-Marie here >>>
Dr. Beck has also developed a number of music videos, including, with WHO -- Nurses & Midwives: Now More Than Ever  (in eight language versions) and 'At The Heart of It All: Nurses & Midwives for Universal Health Coverage. As well she created NIGH's Daring to Tell Our Stories to the World  and collaborated to produce Daring, Caring & Sharing to Save Mothers' Lives and, recently, a renewal of the Nightingale Declaration for A Healthy World campaign, now in ten languages.

Dr. Beck has also authored and co-authored numerous featured publications —  peer reviewed journal articles and book chapters, as well as keynote presentations on five continents — most recently for the 2020 Conference of the Commonwealth Nurses & Midwives Federation in London, UK. She also played a key role in achieving NIGH's Special Consultative Status' granted by the United Nations Economic and Social Council (ECOSOC) in 2018.

Dr. Beck's most recent article (2021) — 'Creating the Nightingale Initiative for Global Health: Theoretical Reflections to Follow in Florence Nightingale's Footsteps' — has been published in Open Access in English, Portuguese and Spanish in the trilingual nursing journal Revista Latino-Americana Emphermagen.

In collaboration with the Congress of NGO's in Consultative Status with the UN (CoNGO), Dr. Beck has contributed two UN Civil Society Development Forum panel presentations to prepare for UN ECOSOC Annual Ministerial Reviews for Global Health in Geneva (2009) and for Gender Equality, Empowerment of Women and Development Cooperation in New York City (2010).

Dr. Beck has also been an active member of the "Yellowhead Trail" Chapter of Toastmasters International (TI) and has served as an 2018-2019 Area Director for TI District 64. Based on eight years of accomplishing a series of 40 required presentations and related leadership activities to educate and empower the personal and professional growth of her peers, Dr. Beck has recently achieved the highest-level education Award from TI — as a Distinguished Toast Master ‘DTM.’ She now aims to use this ‘credential’ to develop innovative ways to educate, encourage and engage nurses and concerned citizens to share their voices and tell their stories in the global civil society arena.

Recently, Dr. Beck returned to Canada's National Capital Region after residing in the Manitoba prairie towns of Neepawa and Kelwood for seven years. While in Manitoba, she expanded her knowledge of grassroots views and local-to-global outreach applications towards raising public consciousness and personal commitment to world health. Her primary goal is to continue to engage and empower nurses, midwives and concerned citizens to be advocates for the most pressing health and development needs of our time — at local-to-global levels.

Above video recorded in 2019 at 'Deerhaven Lodge' near Riding Mountain National Park in Manitoba, Canada, from NIGH's archives.