This Is Our Work!

by Hannah Bergbower, RN, BSN, MPH — Nurse Educator for the US Peace Corps / 'Seed Global Health'**
In July of 2014, I moved to Tanzania with a program called the Global Health Service Partnership. This is a partnership between the U.S. Peace Corps, Seed Global Health and PEPFAR where nurse and physician educators have the opportunity to serve for a year abroad. I was leaving with the second cohort of a program that was still a very new idea and I sincerely had no idea what to expect.
Now, I can clearly see that when I was leaving, through most of the first year, I was in a complete daze. I had never witnessed such committed or enthusiastic students or lived in a home where running water was far from a guarantee. Everyone at home spoke English and now a new language, which I had barely heard of, was all I could hear spoken around me. I had never shopped in a “sokoni” and most importantly in many ways, I had never entered a hospital like the one I spent two years teaching and working in.
This story isn’t about me, but a glimpse into the work, the students, the families, the babies AND the mamas.
​
Over the course of my first year in Tanzania, I witnessed suffering and death at a rate I had never imagined existed. I felt feelings I could have never believed I would need to feel. I grieved for people I didn’t know because, in the end, I was frequently left feeling powerless. Yet, the silver lining was the work I was there to do. I knew that one day, long after I would leave, these students would be empowered with an education that no one could ever take away.
“I witnessed suffering and death at a rate I had never imagined existed.”
​
​Across the world, a woman dies every two minutes due to pregnancy and childbirth and over half of those deaths occur in sub-saharan African countries, like Tanzania (World Health Organization, 2016). These are babies who will never make it home to meet their brothers and sisters and mama’s who will never return home to their children and families. “What is the problem, why is this happening?” is a question I get asked often. Many times the answer is resources, but much of the time it is education. ​
​
“What is the problem? Why is this happening?” 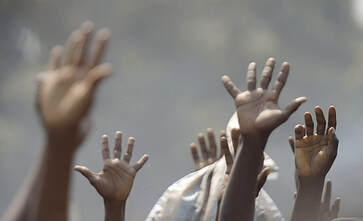 I didn’t enter the labor ward or Maternal Child Health scenario until my second year of service. This is when I realized, I had opened a door to a place that I could not turn away from. There was a day during this second year, when a class of seventy students and I had gathered to learn about obstetric emergencies that reinforced this realization even more.
At the beginning of the class, I asked the students if they had ever witnessed a neonatal mortality at the hospital. Everyone raised their hands. I asked the students if they personally knew a mother who had lost a baby. Everyone raised their hands. I asked the students if they knew of a woman who didn’t get to come home after delivering a child. Again, everyone raised their hand. Then, after a deep breath, I said, “this is why today we learn how to save both. Who is ready?” They all raised their hands. A deep breath always seems appropriate when we remember that, a flight away is a part of the world where no one in the class would raise their hands to answer these questions.
We spent nearly the whole day learning about pre-eclampsia, postpartum hemorrhage, shoulder dystocia, partograph and more. This was the same session my colleagues and I had taught many groups before. First the students would learn the material and then, using skills equipment, they would practice with their hands. All of the students were checked off on each module and I witnessed them in their excitement, ready to move into the clinical setting.
It felt like my heart had dropped from my chest into my stomach. I continually kept hearing a voice saying, “We should have been there?” Clearly the students, who were also deeply in mourning, could somehow see my shock. One intelligent and amazing young woman looked me directly in the eye and said, “Madam, don’t worry because next time one of us will be there. You taught us yesterday what we need to know to save our sisters. This was a lesson for us all and we are nurses. This is our work! Next time, one of us will be there.” ​ 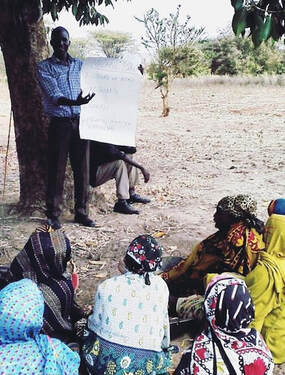 It didn’t make that loss feel any less worthy of my grief, but her words quickly reminded me of the magnitude of the purpose these nursing students would serve and the importance of education. These students did not sit in despair but rather, felt equipped and motivated to save women and babies wherever they may be and their mission was clear.

​This is how we change the world. We must share what we have been given and trust that those we share with will remember to share too. ​
​
**The Global Health Service Partnership is a program recruiting nurses and physicians to serve as educators currently in Tanzania, Malawi, Uganda, Liberia and Swaziland. Please visit www.seedglobalhealth.org.
More About Hannah...
“While I was still in nursing school, a student colleague told me she thought she might later be interested in teaching nursing. To that, I quickly replied that I would never teach. I often reflect upon this conversation and recognize how little I realized about the how rare a quality education can be. When I left for Tanzania, I had never planned to stay a moment past my one year commitment. I, like most, had other plans. But fate chose me and I chose to stay for a second. I learned something new every day of this experience and continue to learn from my students and colleagues, even though I am no longer working at that site.” ​ 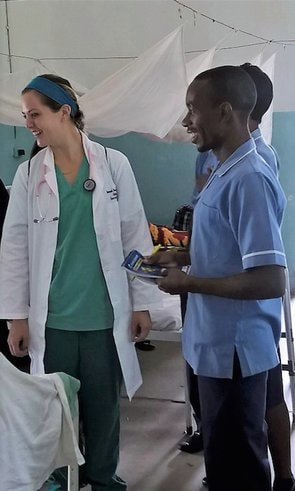 Hannah Bergbower RN, BSN, MPH is a nurse and public health specialist with a passion for global health, women’s health and empowerment, and health systems strengthening. She graduated with a Bachelor of Science in Nursing from Lakeview College of Nursing in 2010 and with a Master of Public Health in Behavioural, Social and Community Health from Indiana University in 2012. She also completed a two year fellowship in Global Clinical Education through Massachusetts General Hospital in 2016. In the United States, she has worked in a variety of emergency department settings — from nationally-ranked Level 1 trauma centres — to community hospitals.
Hannah moved to Tanzania as a volunteer nurse educator with the Global Health Service Partnership in 2014, a partnership between the U.S. Peace Corps and Seed Global Health, where she continued in an educator role in academic and clinical settings through 2016 before moving to Malawi as a Nurse Mentor with Partners in Health.
Through her work globally, Hannah has gained significant experience and understanding of health and education systems in sub-Saharan countries. Whether sustainable solutions to build capacity within or emergent response, her work has supported the needs of some of the most vulnerable and disenfranchised populations in the world. Hannah continues to share her global health work and journey at www.hannahbergbower.com.
Tanzania Scene from  https://www.wallpapertip.com/wpic/howwxm_mount-kilimanjaro-wallpapers-mount-kilimanjaro/
Photographs from Hannah's archives, used with permission.
Top left photo of students from left to right:
​Mlelwa Netho S., Lendimi Stephen W., Rebeka Peter, Tunga Deus Kainga,  Siriel Boniphace, Razack Kapene and Nancy Mwamfwagasi.
Top right photo of Hannah Bergbower teaching a circle of students.
Photo of student teaching women in the field is of student Mlelwa Netho S.
Photo of students practicing airway management — around the 'Neonatalie' manikin — used with permission, from Elisa Vandervort.
SDG Logos are posted as used following official UN SDG Logo Guidelines