Nightingale Initiative for Global Health (NIGH)
Uganda
DATELINE: March, 2022
ACHIEVING UN SDGS BY ENDING GENDER-BASED VIOLENCE
During the COVID pandemic — because schools have been closed and adults are also staying idle at home — the most vulnerable groups of people, that is, women and children, have been exposed to the different forms of GBV — much more than before. There have been increasing cases in all of the negative outcomes of this violence — including instances of rape, defilement, early marriages and teenage pregnancies, prostitution, and incest.
​It is also worth noting that — apart from the physical, sexual and mental health consequences that Gender-Based Violence renders to victims — these threatening practices also reinforce inequalities between men and women and between boys and girls. These compromise health, increase the vulnerability of women to access reproductive health services, and decrease the victims’ abilities to contribute their productivity within their families, and within their communities at large.
Positive Outcomes for Victims, Their Households and Their Communities
About the Author
DATELINE: Summer, 2017
KICKING CHOLERA OUT!
On September 26th, 2017, a grouping of 30 cholera patients arrived at the Bwera Hospital where I work — in the Kasese District of southwestern Uganda, on the border with the Democratic Republic of the Congo. Five people died, before the outbreak could be contained.

To discover more details, I went to the Bwera Hospital and found one nurse on duty — in an area of isolation set-up to keep the infection contained.  I asked him about the number of cases so far, since the first day. He reported that 182 people had been admitted, 173 discharged while three who had died, there.
After all this, Uganda Red Cross Society and UNICEF and the World Health Organization came to intervene and health workers went 'to the ground' — into the community — to sensitize people about how to improve sanitation, use safe water only and report any suspected cases to the nearest health facility.
Next: Taking Community Action! 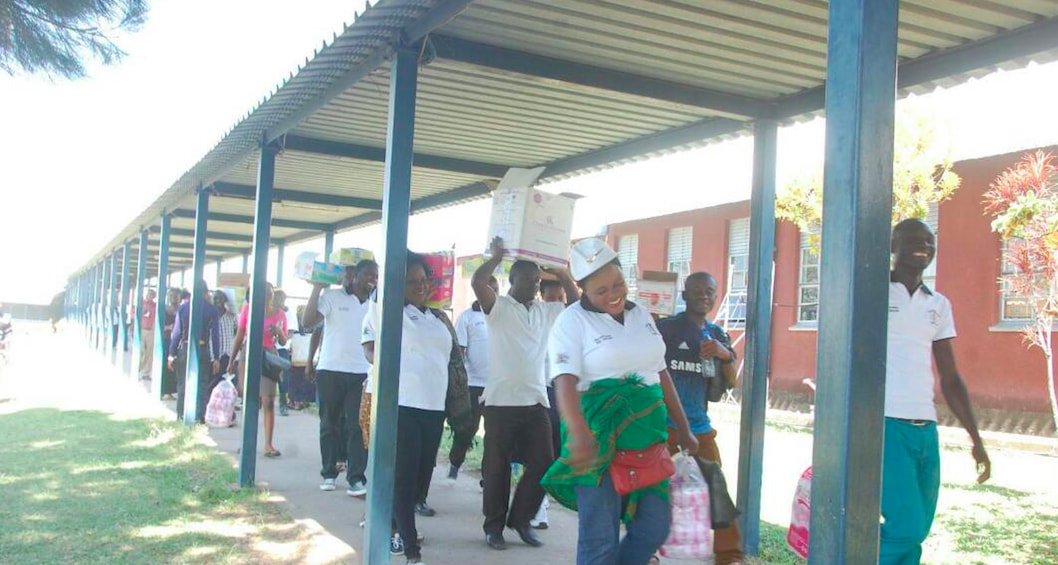 About the Author:  Mr. Bwambale Fauza has served a leading Ugandan Registered Nurse serving as Regional Coordinator over five District Health Services in the southwest mountainous region of the country, on the borders with the DRC (Democratic Republic of the Congo) and Rwanda. His responsibilities included health care administrative oversight and medication delivery audits for nine Health Care Service Facilities serving a primarily Muslim population of 3 million people (6 million in the region) with an ongoing administrative schedule of motorbike visits over rural roads to each Facility. He is proficient in four languages, English, Swahili, Lukinzo and Luganda. Mr. Fauza holds a Diploma in Nursing obtained at the Kagando School of Nursing and Midwifery in 2008. He has also completed short courses in STDs, HIV-AIDS, malaria prevention, care support and communication, as well as Guidance & Child Counseling and Home Nursing Care and related support. Previously he was employed by the Kasese District Local Government and was posted at the private health centre Mpondwe Muslim Health Centre since 2009. In 2019, he moved to Canada to establish a new life for his family. He currently serves as a Primary Support Worker and aims to achieve his Canadian Registered Nursing Bachelor's Degree in able to return to sharing his full nursing knowledge and many skills to the Canadian healthcare system.
Image Credits: TOP IMAGE: https://www.harpersbazaar.com/uk/travel/a30170475/uganda-why-you-need-to-visit-the-garden-of-africa/
ABOVE: SDG Logo #s 6, 3, 1 and 11 used with UN Guidelines. Photo of Mr. Fauza from his archives, used with permission. BELOW: 'Kick Cholera Out' activities provided by Bwambale Fauza through the TRUE ROOTS  Association and the Mpondwe lhubiriha Town Council, used with permission.