The Nightingale Initiative for Global Health (NIGH)
﻿How the 'Heartbeat' video music track was created for 'At the Heart of It All'....
﻿ 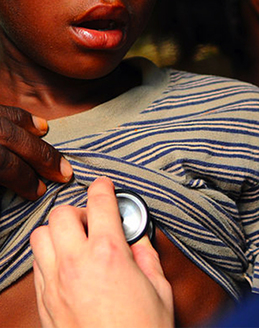 The musical track 'Heartbeat' was commissioned to Pete Kines in January 2014 by the video’s producer, Deva-Marie Beck, who provided the original idea of listening to the human heart and using percussion instruments. The first versions of the musical track, slides and messages — used in the video — were mutually- inspirational in the creative process towards the final version of the video. The latest version — called ‘Heartbeat’ — was composed and performed by Pete Kines who is a drummer and percussionist, as well as a senior researcher in workplace health and safety. The musical track was mastered by Andrew Kines — who also was the video editor for NIGH's first global project 'Nurses & Midwives: Now More Than Ever for a Healthy World.' -- available here in eight language versions.

Video Photo Credit: From Wikimedia Commons. Jolene Cook, of the Canadian Air Force, listens to the lungs and heartbeat of a child in Haiti, in 2008. Photographer: Adam Nuzzo. In the public domain. More details >>
Nightingale Initiative for Global Health •  2020 ©