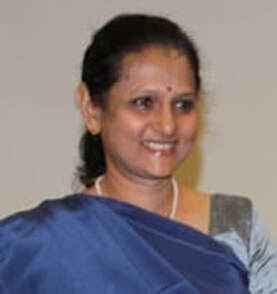 Dr. Phalakshi Manjrekar is the distinguished Nursing Director and Member of the Board of Managers (Trustees) at the P.D. Hinduja National Hospital & Medical Research Centre (HHMRC), a major healthcare delivery provider that has, since its founding in the 1950s, served more than 13 million patients in Mumbai, India. She has also initiated responsibility to widen nursing’s outreach through a growing Hinduja Hospital Mobile Health Clinics venture — that will be extended, across 2015, to six Mobile Units aimed to provide free primary health care to 1,000 patients per day, among Mumbai’s outlying urban poor. She also volunteers — in an independent capacity — as a nurse leader meeting primary, maternal and child health needs in remote villages.

​In these roles, Dr. Manjrekar is responsible for the oversight and professional development of 700 staff directly under her charge — including nurses practicing in both hospital and clinic setting settings, and most particularly, those working to ensure the optimal health of mothers, infants and young children. She is continually focused on the professional-development needs of her staff, including to identify ways to motivate and retain them to remain in Mumbai and in India. She reports that she is challenged by the continual recruitment of Indian nurses to other places in the world and by the negative impact this brain-and-skills-drain has on the Indian people.

From all these vantages, she has served as a co-researcher to achieve maternal health outcomes among India’s rural and urban peoples in collaboration with a research team from the Missouri University of Science & Technology (MST), the University of Cincinnati (UC) and the Sardar Patel University in Gujarat, India. These programs were hosted by Dr. Manjrekar and HHMRC and included visiting faculty from UC and MST. The goals of these programs included empowering Indian staff nurses and nursing students to adopt an evidence-based research approach to their practice. Through her facilitation, this education pilot program was then expanded to include the 700 nurses at HHMRC and to faculty and students in five colleges of nursing within India.

To address the multiple concerns of nurses and nursing educators across India, Dr. Manjrekar has conferred with global and regional nursing leaders in Canada, Great Britain and from across the Commonwealth, as well as in Switzerland and in India — where she has attended World Health Organization briefings in Geneva and at WHO SEARO in New Delhi. Dr. Manjrekar has developed related presentations — focused on maternal and child health in India — to keynote for the International Conference of the Commonwealth Nurses & Midwives Federation in London, UK (2014) and for an official ‘Parallel Panel’ of the United Nations Commission on the Status of Women (CSW) in New York City (2015). Her presentations and publications of her work were well-received at the 2014 Humanitarian Technology Conference sponsored by Harvard University and the Massachusetts Institute of Technology.

Dr. Manjrekar has served as Chairperson of Nurses’ Welfare for the Maharashtra state Chapter of the national Trained Nurses Association of India (TNAI). Collaborating directly within TNAI as a regional leader, she has networking access to 1.5 million nurses across India. For her exemplary service to Indian nurses, she has been awarded membership in Sigma Theta Tau International (STTI) the largest international Honour Society of Nursing. In 2017, she received her Doctorate from the historic and leading-edge SNDT Women's University in Mumbai.

Dr. Manjrekar presently serves on the Executive Committee of the NIGH World Board of Directors and oversees the development of NIGH World’s presence in India, in particular the Nightingale legacy for Indian nurses. In this role, her work has been featured on NIGH’s websites — where she has contributed key articles on Indian maternal health outcomes and disaster preparedness. In June 2011, she represented NIGH World as a featured panelist speaking on ‘Using New Media to Empower Nurses’ at the Women’s World 2011 Conference (1,600 attendees) convened at the University of Ottawa, in Canada.

Photo from Hinduja Hospital archives, used with permission.
Our Team >>>