The Nightingale Initiative for Global Health (NIGH)
NIGH's 2017 Gala Reception during the 61st
​UN Commission on the Status of Women
celebrating the 'Exemplar' voices of Nurses & Midwives...
On March 16, 2017, NIGH hosted our 3rd Gala Reception during the annual UN Commission on the Status of Women in New York City. This year's event welcomed more than 80 nursing and midwifery leaders at the New York Academy of Medicine.
​
Featured at this Gala Reception were our  'Advocacy in Action' Awards created by NIGH
​ ​to acknowledge leaders who have been 'Exemplars' in the global nursing community. ​
topics. Government agencies, departments and academic bodies—including the  World Health Organization (WHO)—often call on her to speak and consult on many issues surrounding nursing, health human resources, leadership, and health-care policy. Shown in the above photo are Dr. Shamian, in the middle between Holly Shaw, PhD, RN, NIGH's lead UN DPI-NGO Representative (left and Deva-Marie Beck, PhD, RN, NIGH's International Co-Director and Co-Founder (right). To learn more about Dr. Shamian's leadership at the United Nations, click here >>
​
mapped and established strategies for much-needed follow-up with chronic cases when patients leave the Hadassah Medical Center in Jerusalem and return to their homes in the West Bank.  ​
the ethical, cultural, spiritual, and psychosocial needs of individuals, families and communities…. At Molloy, you will find a learning environment where students, faculty and our community partners strive to grow professionally and personally. We embrace the belief that we are all lifelong learners in a global community.”
exceptional nursing staff and the role they play as members of the healthcare team. This approach enables us to keep patients at the heart of everything we do," Thomas Smith, DNP, RN, NEA-BC, Senior Vice President and Chief Nursing Officer. ​ 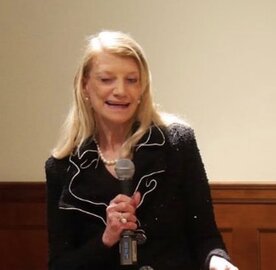 Exemplar — Excellence in Teaching & Mentoring Nursing’s Future Leaders to Joyce Fitzpatrick, PhD, MBA, RN, FAAN, RN, AAN's 2016 Living Legend, Elizabeth Brooks Ford Professor of Nursing at the Frances Payne Bolton School of Nursing, Case Western Reserve University in Cleveland, Ohio. ​Dr Fitzpatrick's prestigious 'Living Legend' Award is the highest honor to be bestowed by the American Academy of Nursing (AAN).  Fitzpatrick — who previously served as Nursing Dean of Case Western Reserve University for more than 15 years — is one of just five selected for this prestigious award. From an AAN press release, she “is best known for her contributions toward advancing the science of nursing education at universities and health ministries around the world. From developing educational interventions focused on HIV/AIDS prevention in Uganda to designing a 10-hospital project centered on improving the nursing care provided to elders, her research has shined a spotlight on the meaningfulness of nurses’ work life.”
+ Much appreciation to the generous Sponsors of NIGH's 2017 Gala Reception...