The Nightingale Initiative for Global Health (NIGH) 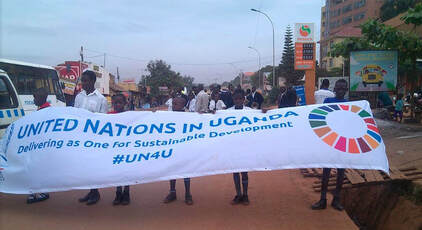 Far from the United Nations in New York — where the UN Sustainable Development Goals (SDGs) were adopted by all UN Member States in 2015 — UN Day 2017 was also celebrated, at the grassroots, on October 24th, in Uganda’s capital city Kampala. During this day — the UN’s 72nd ‘birthday — activities were carried out in four primary school divisions of Kampala Capital City Authority — Kawempe, Nakawa, Rubaga and Makindye. This event was an example of global goals translated into grassroots action.
A street-wide banner introduced the topic and school lessons highlighted the UN SDGs. Major activities were focused on climate action — for SDG # 13 — and urbanization — for SDG # 11.  Tree and grass planting was accomplished, plus cleaning of the city markets and roads and painting of school blocks and improvement of the sanitation in the congested city slums.

By: Bwambale Fauza, BSN, Regional Coordinator Nursing Officer - Kasese District, Bwera Hospital & Bukonzo West Sub-District, Uganda Secretary, NIGH Uganda
A recent cholera outbreak in my region of Uganda prompts me to write this story as a reminder of the the misery cholera causes — and the causes of cholera --  as well as to report, with pride, on the actions and fortitude of fellow Ugandans who are working to prevent re-occurrence and to strengthen our region to be healthier overall.
As the United Nations celebrates ‘World Toilet Day’ on November 19, every year — with this year’s theme ‘A Time for Action’ — it is clear that this message means much to us ‘at the grassroots’ of this continuing challenge to global health. Of course, this outbreak is directly related to UN Sustainable Development Goal # 6 — Clean Water and Sanitation. But it is also connected to SDG # 3 – Health & Well-Being. And —because clean water costs more than the poorest can afford — SDG # 1 — Poverty is related — as is SDG # 11 — Sustainable Cities & Communities — because improved toilet facilities are still needed.
On September 26th, 2017, a grouping of 30 cholera patients arrived at the Bwera Hospital where I work — in the Kasese District of southwestern Uganda, on the border with the Democratic Republic of the Congo. Five people died, before the outbreak could be contained.
To discover more details, I went to the Bwera Hospital and found one nurse on duty — in an area of isolation set-up to keep the infection contained.  I asked him about the number of cases so far, since the first day. He reported that 182 people had been admitted, 173 discharged while three who had died, there. After all this, the Uganda Red Cross Society, UNICEF, and the WHO came to intervene and health workers went 'to the ground' — into the community — to sensitize people about how to improve sanitation, use safe water only and report any suspected cases to the nearest health facility.

Bringing a "Children's sdg song" to the world 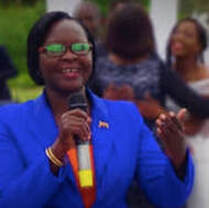 Ms. Juliet Mugirye
As one of their first innovations, the NIGH Uganda founders have initiated a music project to prepare a ​Children's SDG Song for Ugandan school children to sing and perform — aiming to share this song, worldwide, on YouTube — to increase public awareness of the UN SDGs and eventually to be made available for children to sing across Africa, in both Swahili and English (lyrics on the right).
​        They have commissioned Ms. Juliet Mugirye — the international gospel songwriter and performer  — to compose this song and prepare groups of students to sing it. Ms. Mugirye’s most famous song “Wele-Weffwe” won accolades at the Pearl of Africa Music Awards (PAM Awards), in the category of Best Gospel Artiste in Uganda. Over the years, her music has been appreciated by a cross section of people because it cuts across generations — touching the young and the old — in Uganda and with the East African Diaspora, worldwide.

Photo Credits: The boy in a yellow shirt — planting a tree (above right) — is from GoOverseas.com. All other photos courtesy of Andrew Mukhwana. Kick Cholera Out' activities provided by Bwambale Fauza through the TRUE ROOTS  Association and the Mpondwe Ihubiriha Town Council, used with permission.
Nightingale Initiative for Global Health •  2020 ©